October 3, 2012: St Mark’s Community School has become the first school in Ireland committed to the use of Restorative Practice.

The process began in 2010 and staff members, students and parents have all been involved in training in Restorative Practice (RP).

RP is an internationally recognised approach to manage conflict and tensions in communities and organisations by repairing harm and building relationships.

Launching the development this week South Dublin County Council Mayor Cathal King raised a specially made ‘Restorative Practice flag’ outside the school for all to see. The launch also included a viewing of a film made by St. Marks pupils in which the students demonstrated how Restorative Practice has changed how they, teachers and parents resolve issues in the school and at home. One student stated how the last two years have been ‘the best in her life due to the use of restorative practice’.

Mayor King said it was a great honour for St. Mark’s Community School to become the first ‘School Community Committed to Restorative Practice’ in the country.

“This project provides a great example to the 800 pupils here at St. Mark’s of the action people working together can take to improve their lives. The School Principal, teachers, pupils and parents are all to be congratulated for their energy and commitment.”

Speaking at the launch the Minister of State for Public Service Reform and Office of Public Works Brian Hayes said: “I am delighted to be present in St. Mark’s for the launch. I congratulate all involved. It’s a great day and a proud achievement for the school.”

The initiative was delivered through a partnership between St. Mark’s and the Childhood Development Initiative (CDI). CDI provided training and support while staff, pupils and parents developed and implemented the programme. 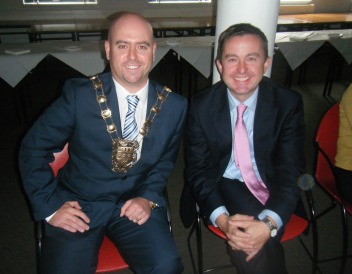 Eithne Coyne, the Principal of St Marks, said that she had been overwhelmed by the response of the school community, that Restorative Practice has been embraced so enthusiastically and that there is a real, deep commitment to making it work.

“The school has a proud tradition of being a caring community, and the strategies and explicit practices of RP support us in the day-to-day work of realising the core values and principles enshrined in our School Vision.” CDI CEO Marian Quinn highlighted the pioneering spirit of the school. “RP is about early intervention and prevention work that strengthens relationships and provides people with skills for the constructive resolution of conflict. There is now a model in place at St. Mark’s that can be adopted in other schools across the country and the school is to be congratulated for being the first to achieve this.”

Since CDI began providing Restorative Practice training in Tallaght West in 2009, 700 people have been trained in the approach with 200 going on to do refresher or more advanced courses, including 100 young people.
CDI has worked in the community in Tallaght West and since 2007 and in that time more than 2,000 children have participated in its programmes.

The organisation is part of a major early years research and evaluation project taking place across Tallaght West, Ballymun and Darndale which is co-funded by Atlantic Philanthropies and the Department of Children and Youth Affairs.

Additional funding has been given to CDI by the Department of Children to continue much of its work in Tallaght for another year – and full details of this will be announced shortly.